One simple truth if you want to make an Impact 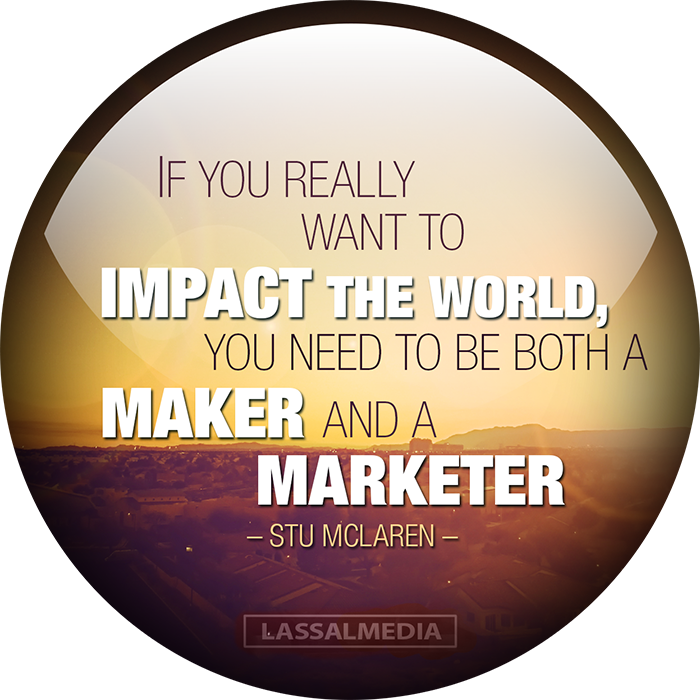 “If you really want to impact the world you need to be both a maker and a marketer.”
– Stu McLaren –

Regardless if your idea is the most revolutionary, word-changing, amazing, genial or if your idea is simply something that will improve the life of a small group of people, as long as it is only in your head, there is nothing to it. Most likely you are not even the only one who has it. Most likely hundreds if not thousands of people have already had the same idea–and done nothing about it.

An idea that has not been acted upon is worth nothing.
Take copyright.
You cannot copyright an idea.
You can only copyright a concrete instance of that idea.

What does that mean?
It means that if you MAKE SOMETHING based on that idea of yours – SOMETHING CONCRETE – be it a process, a painting, a poem, a novel, an illustration, a piece of music – only then can you copyright/patent that very concrete instance of your idea.

You cannot copyright the idea of an “impossible” love story, buy you can copyright a concrete instance of that idea, like the story of Romeo & Juliet, or Twilight, and so forth. As long as each story instance is original.

Da Vinci's Madonna with Child is based on the same idea as millions of other Madonnas with Child – yet it is an original piece of art.
Da Vinci would not have impacted the world with his ideas had he not put them on paper, drawn them, painted them, constructed and named them.
Whatever else he might have had in his mind is lost to us.

So the only way to impact the world with your creations is to be brave and to put them out there.
And then you need to show them to us.
Explain them.
Tell us why they are important.
And why they make this world a better place.

That's the marketing part.
Because if you do not do it, who will? Who will care?
The other person? The other person has his/her own ideas to make and market.

← How to learn to deal with "failure" Why does everyone say that change needs to come from within? →

By continuing to use the site, you agree to the use of cookies. more information